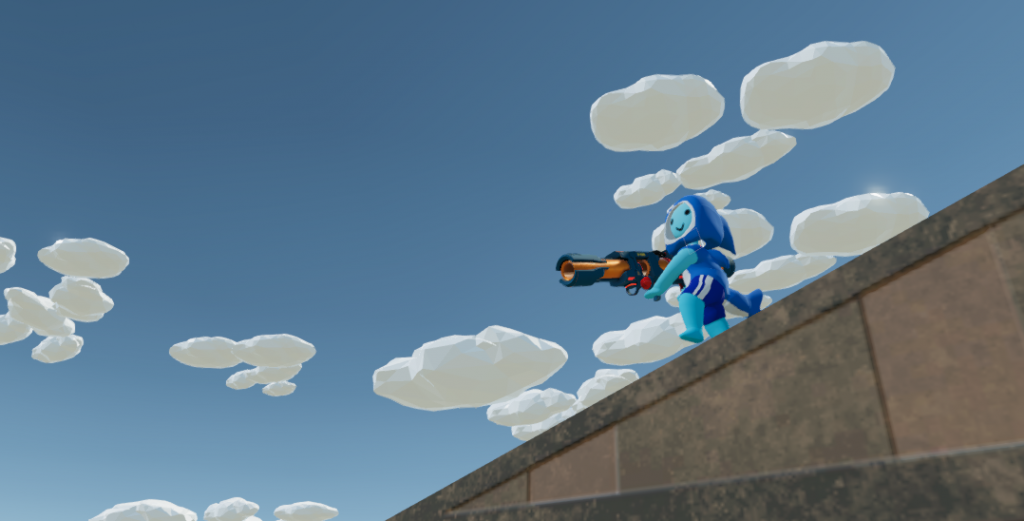 Splash is a casual arena shooter centered on couch co-op. Currently in the game it has up to four person co-op, with one map, and four distinct guns. It is currently possible to be played against time, with max kill count or in endless mode.

Our original idea was to make a lan style shooter. We were quickly told though that it would become a beast if we didn’t immediately change scope. With that information we ended our sights on a couch co op game with a unique theme of water guns.

The game is already fully playable and people seem to enjoy playing it even longer periods of time. In-game pickups and switchable weapons make the game more interesting and engaging.

After our brainstorming, and quick refocus, we took our idea to the drawing board. Coming up with map layouts and art boards. We spared no time in getting to work and with our three artists we set a person on the character, another on the environment, and our final artist on the guns and drops. As for the programmers we started creating the game control to make it as fluid as possible and the second on our particles and lighting as they would both be important to get the proper feel for the player.

As we progressed through the semester our team kept up a fluid pace communicating and passing work between us. There are still some optimization and improvements to do and we will be working on them after this semester.

Plans for the future

We still want to improve our game and see how far we can take it. One of our last improvements is a complete rework of the menu, we discussed several ideas and ended up with a new unity scene that shows a cafe where the avatars will appear as the players join the match by pressing start, and the avatars are animated!

In the end we all were very happy with the outcome and proudly present splash!