Going through all the possible options to base our game off of, we fairly quickly all leaned towards Thrust. To give our own spice for the game, we first decided to try to find a theme which would then shape how we approached making our own version. From somewhere came the idea about “bees with guns” which very soon evolved to mech bees being invaded by mech spiders. And that’s how Superbuzz came to be. 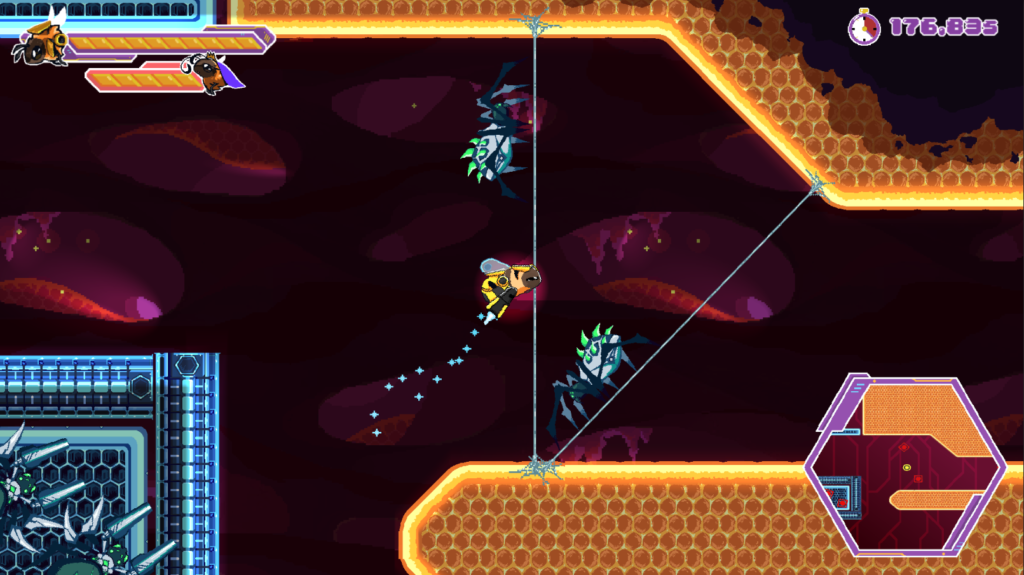 Features:
The game is composed of 8 levels with increasing difficulty, including traps and enemies, with the main goal being making it out of the hive with the queen within given time

First things first, our programmers got some basic player movement and a hook mechanic implemented as they were the most crucial mechanics for our game. Our biggest challenges were very much related to the player character. In the first prototypes the controls were heavy and not responsive enough, making it unnecessarily hard to avoid collisions.

It also proved to be challenging how to make the player character’s movement direction clear. The heroic bee would go through multiple iterations as we were trying to figure out what would be the clearest way to portray this advanced pollinator.

Choosing to go for a color palette helped tie together our assets better as it was a bit tricky to keep the art consistent with multiple artists. We also put heavy emphasis on making the levels visually easy to read. Tilemaps made doing level layouts fairly easy, but also on the other hand easily left the beehive feeling a bit inorganic.

Sometime midway the semester it seemed the project came to almost a complete halt due to some unexpected circumstances that required us to redistribute quite a bunch of the workload, but we clearly picked up the speed towards the end.

Looking back, something we would have done differently is playtesting much more. Being worried about the difficulty held us back a bit from making more fun and daring levels.

Altogether despite some difficulties and not exactly everything making it into the final build, we’re still very much proud of what we achieved.