A great escape from the high life of the elite city to the depths of the slum – back to your people.

Isla is a platformer game with mixed 2D and 3D elements, where you take on the role of a spy who escapes through a city on a floating island.  Be fast as the time is running and avoid the traps and evil robots who are sent after you by the high class of the elite. 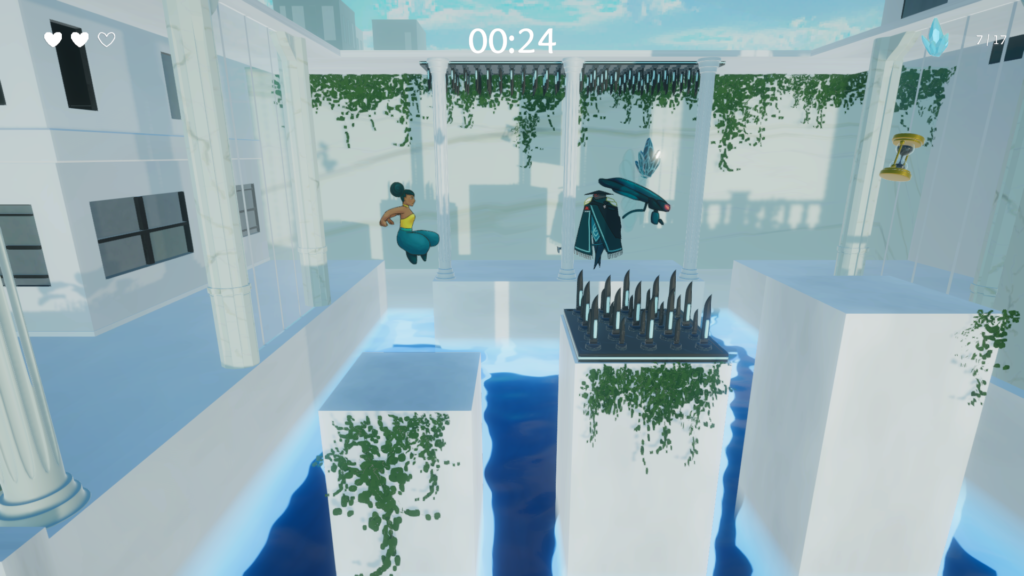 We started the project by choosing a couple of games we wanted to use as a reference. We wanted to make a 2.5D platformer game with 2D characters and a 3D environment. Disney’s Hercules –  an old classic videogame, used mixed 2D and 3D elements like that and was one of our biggest influencers. That game also had areas where the character could run back and forth between different depth dimensions, and that seemed like a good idea to try in our game too. We also had other game references, for example, Shantae: Half-Genie Hero, AC: Chronicles China and Indivisible, just to mention a few of them. We didn’t have too much previous experience with 3D art and we figured that making 2D characters instead of 3D would save us time. Mixing 2D and 3D elements would be an interesting experiment in any case.

The idea of a floating island with solarpunk inspired, partly utopian elite city atmosphere and partly dystopian poor lower area came quickly to us at the very beginning of planning. The prosperous but evil high class and poor lower class workers at the bottom of the city became the main conflict of the story. We wrote a script about an underground spy who gets revealed in the very beginning and starts her escape through the city with important information to people of the slums – her people. As the setting was futuristic, we decided to have robots as the active enemies of the game.

During the first weeks (and even later on) we spent a lot of time on concepts and ideation. There were multiple ideas that we had to abandon due to lack of time, for example, level six, small jump as a mechanic, a huge robot enemy in the middle of the game, a third robot enemy, 3D tree assets and so on. The basic mechanics of the game were decided quite fast as we tried really hard not to make the scope of the game too big and complicated. Despite that, after some valuable feedback in the middle of the game development, we felt that something needed to be added to give the player more of a feeling of pressure. We decided to create a timer and an hourglass collectible which would give the player more time. To make those work in the game we needed a lot of level design changes and playtesting.

For art stuff, dividing the tasks came quite easy to us, and everyone got to do things they enjoyed while also dabbling with something new. We knew 3D would be hard and time-consuming so we made sure most of the artists were focusing on that. Lots of voting was used both for artistic choices as well as gameplay and story aspects, to ensure fast decision-making as well as fairness.

The artists focusing on 3D had to start pretty much by learning the basics. Especially most things considering textures and materials, and importing the assets successfully from Blender to Unity, seemed to require a lot of trial and error.  At least we can say we learned a lot on that rough path, and the team members were helping each other out.

Overall, our biggest problems clearly had to do with difficulties in the level design, and our artists being pretty new to 3D. Despite encountering multiple problems we thankfully managed to solve most of our problems and ended up with a project we’re all very proud of as our first 3D game.