We present to you two games, one that we started to work on months ago and were able to finish during this Game Camp, and the other shorter project that we brought together in a week during the summer camp.

This is a 3D arena brawler, where you play as a moth warrior facing off against droves of ants and beetles, using various weapons. The gameplay is broken into waves, where the previous batch of enemies must be defeated before the next can be engaged. The different weapons are littered around the battlefield and dropped by defeated enemies, and allow variety in gameplay as different weapon types have different attacks.

Find out more about the game and download it for free on itch.io.

Development for the game started in autumn 2018 and the game was eventually released in summer 2019. Our initial inspiration was the general idea of wanting to make a game with combat mechanics, as our previous projects were more focused on platforming and general puzzling. We took directions from Hotline Miami for the perspective and games like Breath of the Wild and Devil May Cry for the animations. Also inspired by the Devil May Cry series, we wanted a simple combo system along with different weapons. 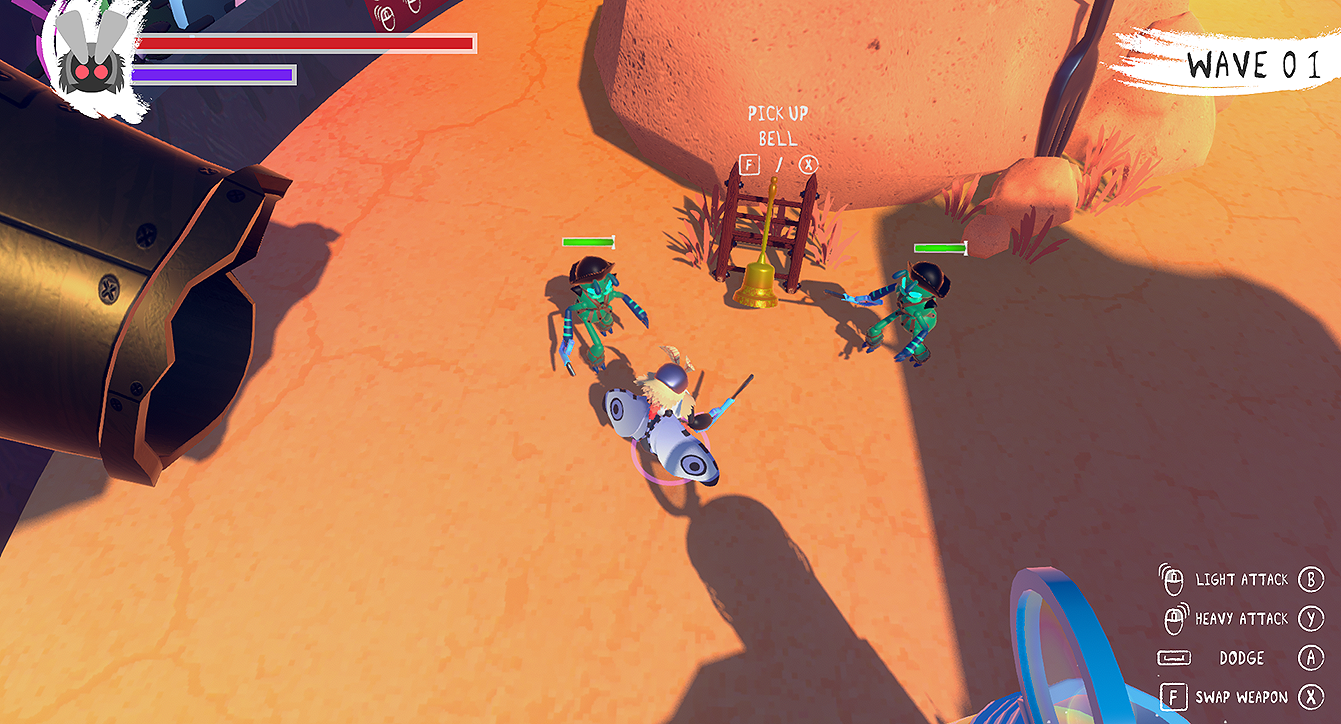 The primary problem in the project was us underestimating how challenging it would be to implement the core mechanics in full, and making them work together smoothly. Player movement versus enemy AI movement, beautifully blending attack animations versus responsive and snappy controls were all interesting problems to solve. Some features were definitely cut out in favor of polishing existing ones.

The design of the core fundamentals took a long time to figure out, and we went back and forth on issues of player and enemy interactions. As an example, we ended up deciding that to make the enemies threatening enough, they should be able to interrupt the player’s attack by landing their own first. This encourages the player to observe the enemy and exploit weaknesses. To not make the game too punishing or feel unresponsive, we allow the player to perform an invincible dodge from the ensuing stagger-animation. 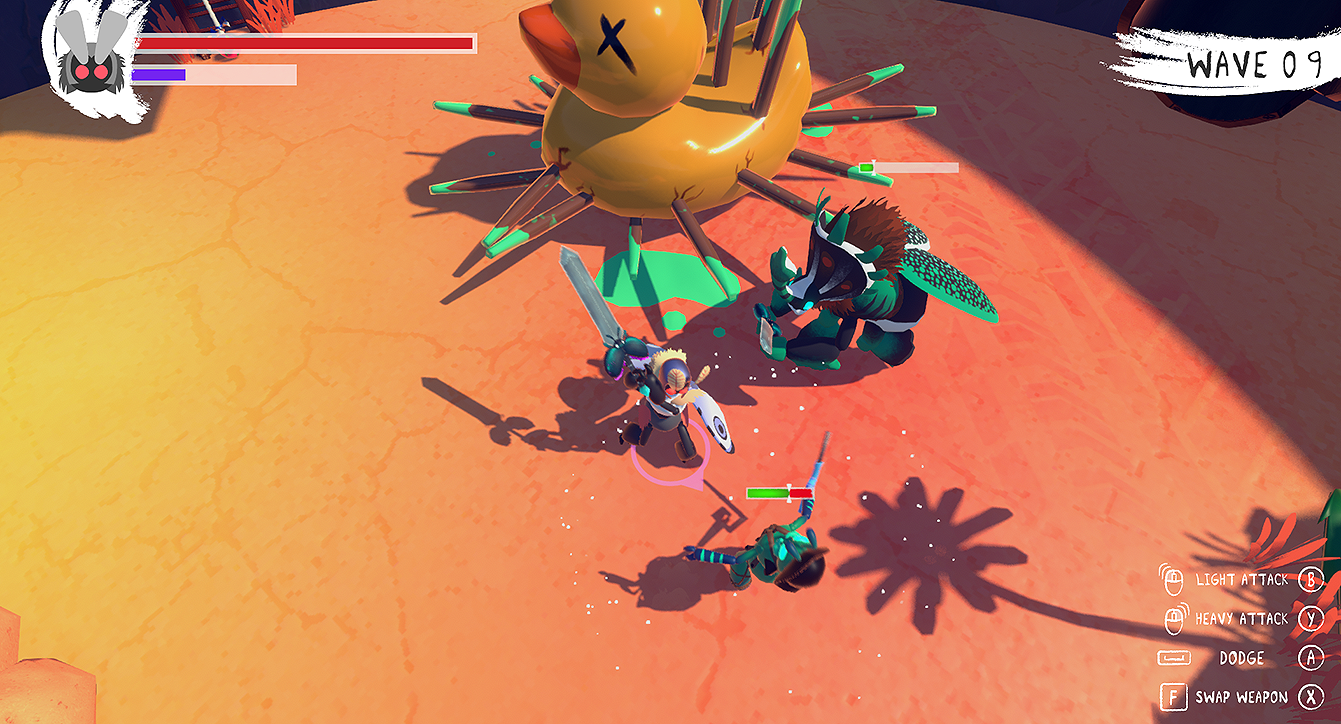 Not wanting to spend too much time both skinning the meshes and making sure they didn’t deform during animations, we opted to build the character models around the same armature from separate mesh parts. This also saved us the trouble of making multiple armatures which would have forced us to modify the animations for each armature or even make completely new animations. In the end, only a few animations stayed the same between the characters, namely the moth and the ant. The beetle itself was too different, looking both big and brutish, of a model to look good using the moth’s comparatively minuscule movement set.

In the vein of Hotline Miami, we had the idea of throwing weapons as a limited form of ranged attack, but we never got around to fully implementing it as the combo system took priority and it would have further complicated the control scheme. Another scrapped idea was environmental traps, that would have used the knockback effect of attacks to launch the enemies into spikes for more damage. The remains of this can still be found in the spiked duck you can find in the finished game.

RPS Switcharoo, or the “developers switch roles for a week” project

After such a long project we felt like having a little fun by switching the programmers’ and artists’ roles for a one week project. A Rock, Paper & Scissors game seemed like a good place to start. For programmers that meant opening Blender to 3D model, rig and animate a hand each. Meanwhile the artists would implement the game logic, score counting and animation controller while the graphics were being worked on. 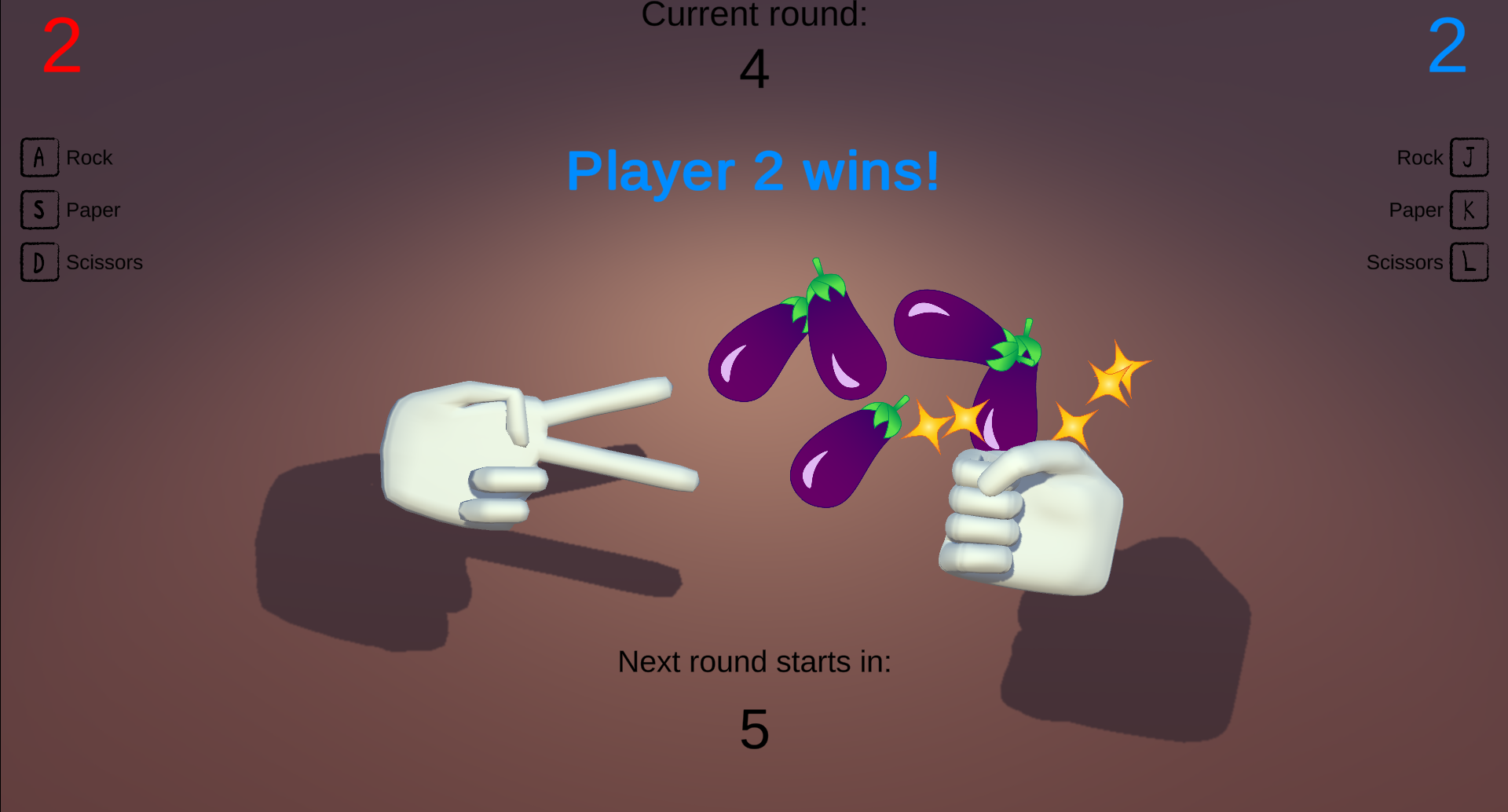 With just the general idea of “Rock, Paper, Scissors” and a point-of-view of the scene to guide us, we ended up taking with the very different approaches to making a hand. One programmer made a slender hand inspired by photographs with short and sharp, to-the-point animations, while the other made a more blocky, chunky interpretation with bouncy, flailing movements.

The artists-turned-programmers learned the basic flow of code, from using public variables in the object’s components, all the way to checking which of the players has the winning hand. All in all, the code needed two heads and four hands on deck at all times.

Switching roles required quite a lot of hands-on mentoring from both sides but it was worth it. Overall it was a very fun experiment that also taught us a lot about what the other team members deal with in their roles on a day to day basis.