My name is Fansu Janneh and this was my second year in GameCamp. This time I wanted to focus on one bigger game rather than multiple small ones.

CavernaWare was in need for SFX’s & Music with a splendid game idea so I reached out to them and poof, the next thing I know, I was provided with a plethora of different interesting ideas they’ve been thinking to fit the game.

I was so excited to be working with such passionate people I decided that I’ll try to focus on the transparent communication with Team CavernaWare to ensure that the vision they have for the game is met in the world of sound design.

Because of the global epidemic I just had this “small” drawback — This whole project is to be done remotely.

Hi, my name is Allan Castellanos, and it is my first time at the game academy. My dream of learning how to implement music and sound effects in video games started this summer! Downloading and installing many gigabytes of new software, watching, and following audio tutorials were just the beginning of this new adventure.

A team was looking for a solid audio person, and I quickly became very interested in the game because of the game idea and the atmosphere they wanted to create “magic and fantasy”. After the first meeting via Discord, I got a list of sounds that may be necessary in the game and what kind of music could be good for the game. My idea for the music was to create something that sounds magical and deep and a little bit retro. So, I decided to give a try to my modular and play some random chords. For the foil sounds, I asked a friend if we I could use his studio because he has a collection of “weird” instruments, so I could try to create unique sounds, the recording was mainly inside a closet filled with blankets. In the end we got a great collection of sounds with great quality that my team could use.

I decided that the best way to ensure transparent communication is to combine both audio as well as visual ways to convey my thought process.

I made mind maps to show my demos step-by-step to the group members through discord, tested the demos with my friends and asked a few questions like: ” what kind of game do you think this kind of music fits?” or “What era of time do you think the game is set?”

I asked for any concept art or background story from the devs, because even if it’s never gonna be in the game itself it helps me set the mood and the feeling through the songs.

I like to think music can tell the unheard story of the game and music has a nice meta-level to it’s storytelling — The story it tells might be different among the listeners. 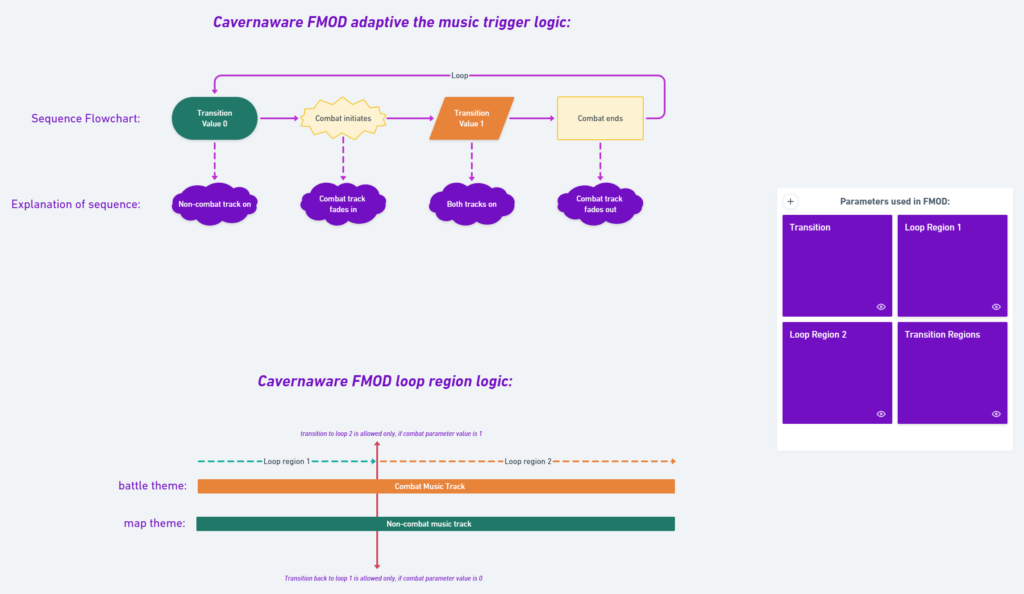 A simple flowchart of the way the music reacts to combat and non-combat stuff with loopand transition regions falsely named as parameters 💩.

The common theme of the game was this medieval fantasy world that doesn’t take it self too seriously but also doesn’t sell itself too short.

I wanted to compose something that has a grandiloquent or pompous feel to it, but still fun and playful full of clichés.

The “grandeur” of the songs came from the orchestral instruments. Spitfire Audio, world renown provider of epic orchestral tools, gave BBC Symphony Orchestra Discover for free and most of the orchestral elements were made with that.

I also used a free harp vst to create some feel of wonder to it. Sampling was a big part of making things swing in the songs as well.

For battlescenes I layered orchestral, arcade synths and rock riffs and synthetic percussion to create contrast and to tell the player this is still “just” a medieval-hack’n’slash-stylized-zombie with playful earworms and “what nots”. 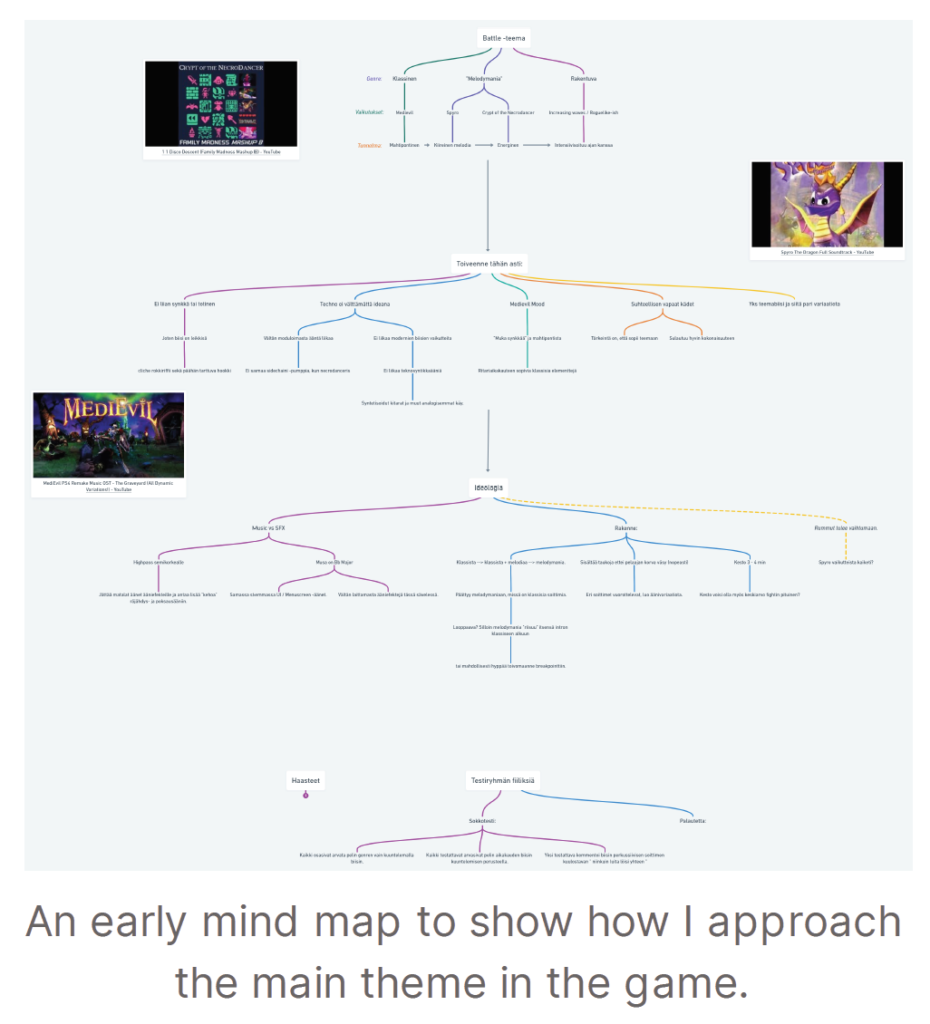 I don’t want to make this blogpost too long so I’ll try to keep the explanation at minimum.

The vision was to use mostly organic voices with some magical synthetic sounds here and there. I asked for some animations in video format, put them into ableton and made sfx while using the video as a reference to trigger attacks n’ tails of different sound layers frame accurately.

I used own sounds, stocks and synths, layered different stuff and experimented like crazy with different effects like Valhalla Supermassive (It’s free, amazing and you should go get it now!)

Menu screen theme was to be more like a lullaby:
a sad/hopeful orchestral composition.

FMOD is something I don’t have too much knowledge about as I mostly do music and sfx’s and the only time I ever have the chance to do dynamic transitions in music is to games here in game camp.

Here’s a graph that explains a bit of what I did:

To wrap things up I had so much fun and I would come here again again to expand my knowledge if only that were possible.

I’m quite sure these gamecamps where the highlight of my school years cause I got to be as creative and childish I wanted to be, doing the things I enjoy.