Gore Kart is a local 4-player party game where you and your friends take control of local maniacs and attempt to blast each other into bits with cars and guns. The most murderous participant wins. So grab your machine guns and bazookas, it’s time to rave! 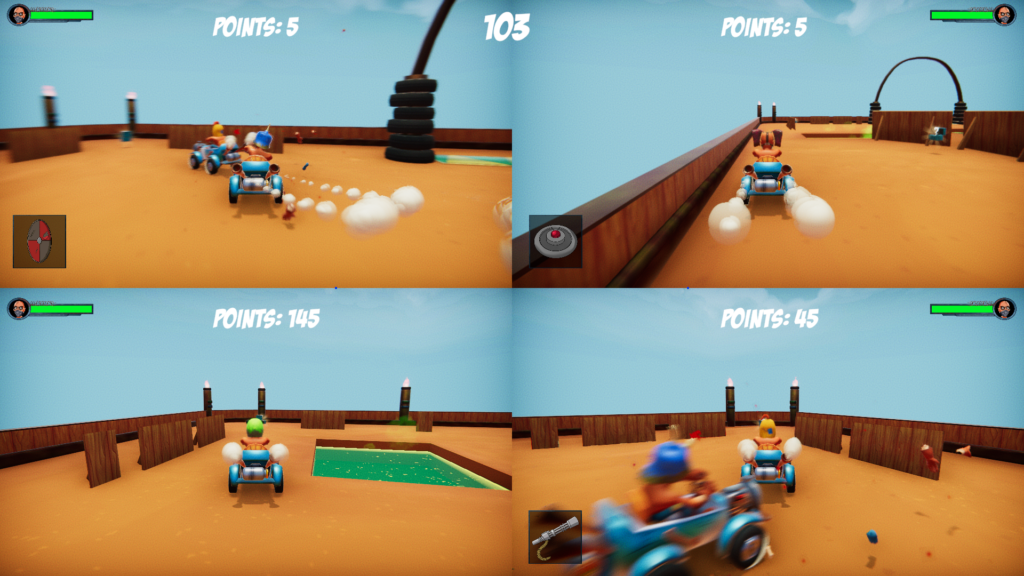 Our initial idea was to make Mario Kart’s balloon battle with blood and gore. While our core idea was simple and clear, we did a lot of back and forth on how we wanted to visually represent the game. First we were planning to make our characters cartoony and bright. However, during the development we struck a line for the characters that while still holding on to the cartoony aesthetic also fit the gore themes.

At first we planned to do a 2-player game with an arena that various interesting areas like ramps and a second level. This proved out to be difficult with the movement we had, and ultimately the only part that made it into the final game are the acid pits that open near the end of a round. We decided to make the arena smaller for the game to become more intense and after receiving some helpful feedback we increased the player amount to 4.

Our team faced a lot of challenges during the development. While we had clear plans and goals at the beginning, the problems we faced both within and outside the project slowed the process down. While many features had to be cut down, the end result is a chaotic game that should ensure amusement  every time you play it.

Note: Due to current circumstances and the game being local co-op only, our team was unable to record a video with all four players present.

Give it a try:
https://drive.google.com/file/d/112cjWqeEXSufqObhY5V_UFgjzULcE7ra/view?usp=sharing