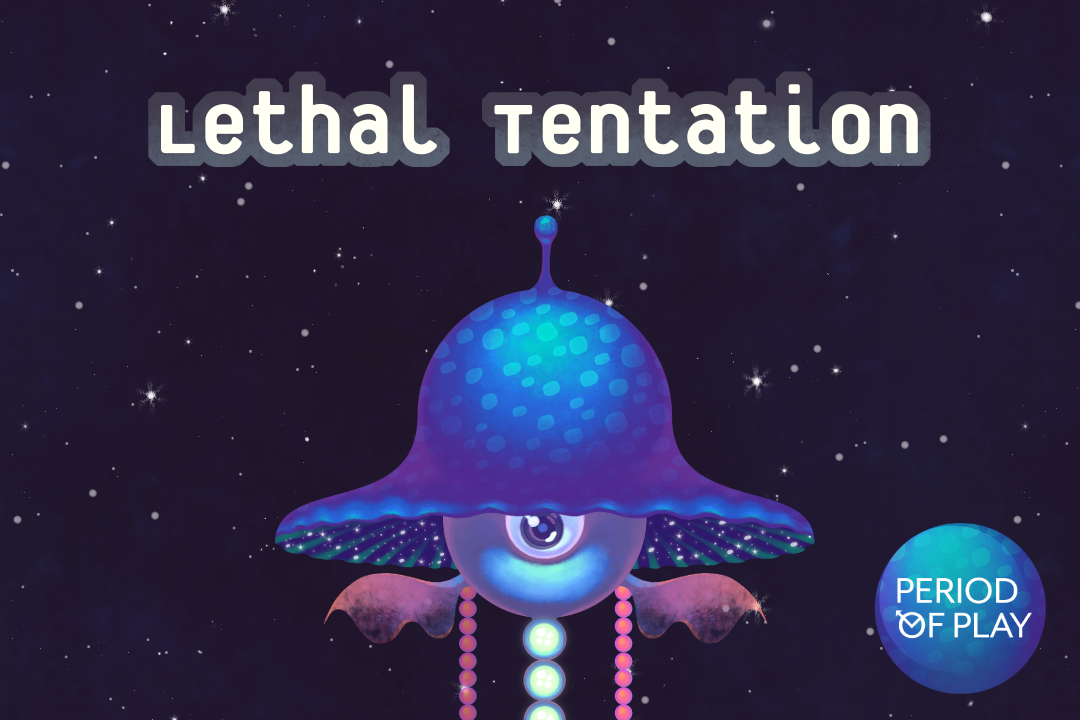 Lethal Tentation is a 2D puzzle game where you play as an alien jellyfish with electric powers. You find yourself on a spaceship, captured by its human staff and held as a test subject, and must escape by short-circuiting security panels and other machines with the electricity in your tentacles. The game has 5 different levels to play through.

After brainstorming multiple concepts we came up with the idea of zapping machinery with electricity to solve a puzzle. The earliest version of Lethal Tentation had the basic mechanics already nailed down: the jellyfish could zap a panel to open a door and proceed in the game. As development progressed, we began to incorporate simple physics-based puzzles to diversify gameplay.

The character design was also established quite quickly, needing only a few tweaks to make it more relatable to the player. Each of the team members then designed a level, and after getting most of the basic mechanics and visuals finalized we set out to finish one level per week. The five level scope was ambitious and resulted in crunch time at the end stages of development, but we managed to finish all five levels and most of the functionality we had set out to include in the game.

Since we wanted to keep the environment mysterious and the character an alien creature, we tried to avoid using plain language in the game world. This meant that we had to non-verbally communicate the controls and mechanics to the player. Because of these decisions, a whole lot of development time went into improving the user experience. For controls, we ended up using contextual thought bubbles that would show a visual tip as if it’s something the jellyfish character was thinking. Careful placement of lights and reactions from the jellyfish in the form of animations both played a big part in communicating important objects in the game world to the player. The jellyfish would look at nearby objects of interest, and point at them with a tendril when they would be close enough to interact with.

When it came to visual development, we decided early on to go with a painterly, line-less art style that would work well with depicting a colorful, oddly-shaped jellyfish creature, as well as let us add different levels of detail to our environment. While matching painting styles between two artists isn’t always the easiest task, we managed to do it without encountering any large issues. Developing a style guide containing tips for color choices, possible brush uses and immediately vetoing smooth computer-generated gradients helped to control our visual style immensely.

It was important to get the game’s music to reflect the setting and the underlying story, the tempo becoming faster the further the player gets in the game. The main menu music was deliberately left quite short with the chosen instrument providing mystery and a sense of being lost in space. Level 1’s simple, bell-like tones reflect the jellyfish’s wonderment about its current predicament. Level 1.5 has the same mystery as the main menu music but with the added tragedy of heartbreaking violins. Level 2 is where the jellyfish starts really exploring the spaceship so the tempo grows faster. Level 3 starts incorporating a metallic instrument, hinting at the machinery to come. The final two levels, level 4 and level 5, are the only ones to use the metallic instrument on the foreground as befits the heavy machinery in the levels. The last two levels are also the fastest tempo-wise. The story’s resolution is befittingly heartwarming, and the end credits music works as a deliberate rev up after the lullaby.

The project was done in week long sprints. Every sprint we set out weekly tasks for ourselves that we should get done by the end of the week. While ambitious, keeping up with a predetermined and strict schedule helped us maintain our pace of development and accomplish most of the goals set out for ourselves.

Overall, we are pleased with the progress we made on the game and the scope that we achieved. Each one of us undeniably learned a lot about teamwork and growing our own personal skill set, and we look forward to another semester of game development!

You are welcome to try our game here: