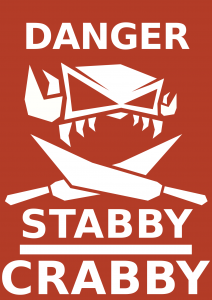 The (Crab) Meat of It

Stabby Crabby is a 3D survival arena shooter/”knifer”. The goal of the game is to survive as long as possible.

Slicing is fast but dangerous in close quarters, shooting gives you an edge by killing several enemies at once but bullets are sparse. Take your chances by diving into an oncoming enemy hoard to pick up an elusive bullet, shoot your way out or use the recoil to fly through the air to safety. Or just hack-and-slash all the way through!

The idea for the game came from the viral video of a real-life crab wielding a knife. The game quickly became a fun, quirky version of Devil Daggers with cartoony graphics. We wanted to keep the two different attacks and the waves of enemies spawned from bigger enemies as well as the survival aspect.

Originally we wanted to include a “power stab” super attack and high scores but ended up tabling them for now due to time constraints and unexpected delays. The latter being code for both programmers having surgery during development and being overly optimistic about recovery times. This also pushed the project from autumn to spring.

During development we played around with the idea of having a stamina bar so that the player cannot attack the enemies all the time. It ended up making the game less fun so it was taken out. There were also ideas for many more enemies with different attack behaviours. There was even a 3D model ready for another fearsome foe, but we opted to stick to the two we had for the final version instead of finishing something in a hurry.

The final game ended up a fun bout of slashing, shooting and dodging a hoard of zombie toasts spewed out by angry toasters. The core mechanics and enemy spawn system in place, the world of Stabby Crabby can be easily expanded in the future.

The game has not yet been released.